To facilitate discussion about the management of our Atlantic urban forests.  Topics will include:  policy development and implementation, balancing economics, the environment and aesthetics, tools and strategies to mitigate the impacts of climate events, pest and disease, urban and landscape design, current research and much more.

Population Viability Analysis (PVA) is of interest to both conservation biologists and the forest sector, because it can predict the potential impact of forest practices on wildlife populations now and into the future. In an adaptive management framework, PVA can inform how forestry practices might be altered to mitigate adverse impacts. PVA provides crucial information for assessment by describing the current state of a population, predicting future population changes, and identifying any threats to population persistence. Assessment and adaptive management are complementary goals and essential for sustainable forest management.

The goal of this project is to develop PVA protocols for use by government, the forest sector and the public. The protocols can then be used to predict the impact of our activities and identify populations that are in jeopardy of being eliminated from the local or regional landscape (This is not a research project but, will take data, models and knowledge we already have and apply practically).

When the Fundy Model Forest (FMF) opened in 1992, the need for research that investigated the long term impacts of forest practices on multiple plants and animals on the same land base, simultaneously, was identified. During 1992, a partnership was formed within the FMF that included researchers (partners included the University of New Brunswick Fredericton, University of New Brunswick Saint John, University of Moncton, Department of Fisheries and Oceans and, Fundy National Park) and J.D. Irving, the land managers. Two watersheds were identified (Holmes and Hayward) and a protocol for the cause and effect research was established.

In 1993, the first year of the controlled study, researchers surveyed pre-harvest conditions and post-harvest impacts of forest practices on a host of indicators: water quality, fish populations, plant communities, bryophyte communities and small mammal populations. Much of the research was published in refereed scientific journals and was used to inform public policy for the management of New Brunswick’s forests.

In 2014, the Hayward and Holmes Brook sites were revisited. In most cases the sites, were 20 years post-harvest. The researchers: Dr. Kate Frego of UNB Saint John and Dr. Alyre Chiasson of the University of Moncton, conducted part of the original study. The current surveys focused on bryophyte and aquatic communities. The original research results showed:

The results of the immediate impacts of forest practices were that the Bryophyte communities showed compositional change over 4 years, even in areas that were not harvested. Although species richness was maintained or recovered 4 years after harvest, changes in species composition were significant in all disturbance classes with greatest change related to forest floor disturbance. In particular, liverworts were lost in areas with forest floor disturbance. (Fenton, Frego and Sims 2003)

The primary results of Bourque and Pomeroy (2001) found that buffer strips placed along the main stream branches had little or no effect when the stream water had already been warmed as a result of deforestation in the upper catchment. No relationship between buffer width and stream warming was found. Water temperatures ranges were still within ideal values for brook trout, though rates of daily changes were not noted. Brook trout populations were highly variable and no differences in population levels or habitat were detected (Melanson 2000).

It is the time of the year where we start to get back into New Brunswick Forests to hunt for non-timber forest products like fiddleheads and mushrooms.  The forests of New Brunswick contain a wealth of plant and animal species. For woodlot owners, the values and reasons for owning woodland are as diverse as the plants and animals living in them.

Our Atlantic Woods: A Photo Guide to Non-timber Forest Products by Ron Smith is the perfect companion. The photo guide is intended to help you identify some of the plants growing in your woodlot and the NTFP's that can be obtained from them. 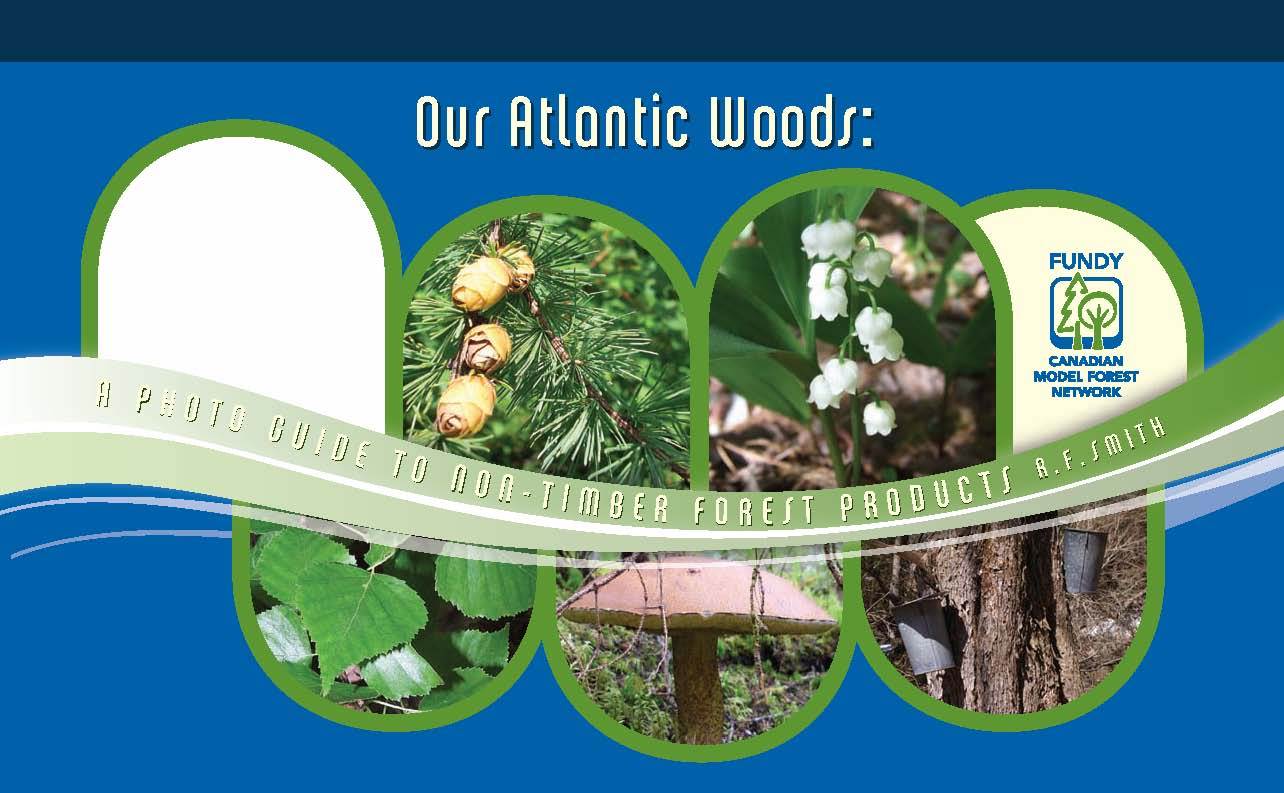 Butternut: a species at risk

The Butternut tree species (Juglans cinerea) (SARA listed as endangered species) are in dying in New Brunswick due to the Butternut canker disease. The tree is important ecologically and culturally to the people of New Brunswick and maybe lost in next 10 to 20 years if the disease progresses.

While there is research is being done, the numbers and distribution of Butternut is in decline (the canker is killing individual trees and whole stands). The fear now is that while research is providing valuable knowledge, it may be too late to save the species in NB. To increase odds of saving the species, three approaches are being used: genetic characterization, archiving trees in a place where there is no canker (BC) and increasing the number and distribution of the trees in NB.

Through a partnership between the FMF, CFS, Notre Dame University and the Province of New Brunswick, the genetics of populations throughout southern NB have been mapped. In the Fall of 2014, Butternut nuts were collected from those populations, have been archived at the CFS and, in the summer of 2015, will be grown. The seedlings will then be sent to BC an Ohio to be planted: acting as an archive for the species and should all the populations be wiped out, used to repopulated the NB stands in the future.